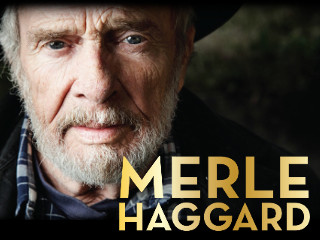 At the age of 73 the veteran singer/songwriter/guitarist/producer/bandleader is still making some of the most compelling music of his long and storied career. It almost goes without saying that Merle Haggard is widely regarded as country music's greatest living recording artist. A rugged individualist who simultaneously embodies and transcends the genre, Haggard is both a seminal superstar and an unrepentant outsider. Over the course of a remarkably prolific five-decade career, he's consistently shown himself to be an uncompromising creative force, far more concerned with pursuing his iconoclastic vision than with meeting the expectations of the music-industry establishment.

Along the way, Haggard has scored no less than 39 #1 country hits; won various Grammy, CMA and ACM awards; become the only California-born artist in the Country Music Hall of Fame; been the only country performer ever featured on the cover of the jazz bible Downbeat; as well as the only man to be invited to perform at the White House and invited to serve time in San Quentin Penitentiary.

Merle Haggard's turbulent and ultimately triumphant life has been full of surprises. The son of parents who'd fled the ravages of the Oklahoma dust bowl, he was born in a converted boxcar in Oildale, California on April 6. 1937. His father died when Merle was nine, and he spent his adolescence following his restless urges, hitting the road and riding the rails. He was also incarcerated in—and escaped from—a series of juvenile institutions, and his troubles with the law culminated in a botched robbery attempt that won the 20-year-old Haggard a three-year stretch in San Quentin.

His prison experiences led Haggard—who'd begun playing guitar at the age of 12 and worshipped Bob Wills, Lefty Frizzell and Hank Williams—to take stock of his life and decide to pursue a career in music. Upon his 1962 release, he became a fixture on Bakersfield, California's thriving country music scene, working manual labor jobs by day and playing local clubs by night. A string of singles for the local Tally label led to a deal with Capitol Records, and in 1965 Haggard launched an incredible string of classic hits including "Swinging Doors," "The Bottle Let Me Down," "I'm a Lonesome Fugitive," "Branded Man," "Sing Me Back Home," "Today I Started Loving You Again," "Mama Tried,” "Hungry Eyes," "Silver Wings," "Workin' Man Blues," "The Fightin' Side of Me," "If We Make It Through December" and the much-misunderstood "Okie From Muskogee."

Those classics found Haggard honoring country-music traditions while drawing upon a broad range of jazz, blues, and folk influences, while his vivid, emotionally nuanced lyrics poignantly chronicled the dreams and heartbreaks of common people, as well as his own harsh life experiences.