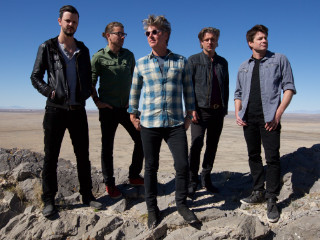 Collective Soul, the Multi-Platinum selling Georgia-bred rockers are not only on the cusp of celebrating their 25th anniversary, they’re also gearing up for an exciting Summer 2018 tour dubbed The Rock & Roll Express. This triple-threat triple bill will feature Collective Soul performing alongside two of their favorite spiritual rock & roll brethren, 3 Doors Down and Soul Asylum.

The Rock & Roll Express will feature the band’s full-throttle energy that was captured so deftly on their recently released Live album. From the elegiac verve of the career-defining “Shine” to the heartfelt universality of “The World I Know” and the earnest offering of “AYTA” (a.k.a. “Are You the Answer”), Collective Soul is clearly firing on all cylinders.

“When you see us this summer, you’ll get the vibe of how much we enjoy what we do. You’ll see how much we enjoy each other, and how much we enjoy making music together,” confirms Collective Soul’s visionary frontman and chief songwriter, vocalist/guitarist Ed Roland. “You’ll get all the hits, but we’re also going to throw in some new stuff too. One thing about having nine studio recordings is that it’s hard to fit everything into the set right now. It’s a good problem to have — to be around that long and have so many songs people really want to hear. But once we find the right live groove, we also know what works in this kind of set.”

Approaching their 25th anniversary in 2019, it’s evident the legacy of Collective Soul is as strong as ever. “I think it all comes down to the songs,” Roland believes. “When we started out as a band, we just wanted to write the best songs we could. We always had the mindset of being an album-oriented band. We wanted to create the 10 or 12 best songs we could get on there. It wasn’t like, ‘Oh, that’s the hit. That’s the one that’ll be on the radio. Let’s hurry up and finish.’”

What does Roland feel is the best song in the Collective Soul canon? “Well, it’s actually the most necessary song I’ve ever written — and that would be ‘Shine.’ Had it not gotten the attention it did, no other song would have been written. But which one is the best one?” he muses. “It’s the one I wrote yesterday, because that’s the way I treat it. If I think I’ve already written the best song I could write, then I need to stop. I don’t think I’ve even come close. My brother Dean tells me all the time, ‘You just live for that next song!’ And I’m like, ‘Yeah.Yeah, I kinda do.’”