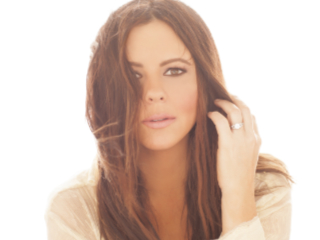 And yet, with the release of her eighth studio album, Words demonstrates that she’s still willing to leap into the unknown, taking greater control of her career and calling the shots in a way that’s unusual in country music – particularly unusual for a woman in the genre.

Words is the first project on Evans’ own label: Born To Fly Records, appropriately named after that CMA-winning signature song, which celebrated risk and adventure. Much is familiar about Words. Evans’ voice is warm and strong, the songs are authentic and memorable, and the actual words themselves resonate with the realities of everyday life.

But the album was an eye-opening experience for Evans as a creative force. As the head of her own small, flexible company, she was able to take a streamlined approach to building it. Instead of subjecting the music to multiple departments, each with their own view of one part of her career, Evans approached it with an instinctual, gut-level focus on making a project that represents the 2017 version of Sara Evans.

“THE ONLY THING I HAD ON MY MIND WITH THIS ALBUM IS JUST GRAMMY-LEVEL SONGS AND THE COOLEST MUSIC THAT I CAN FIND.”

“I didn’t really go about it in any other way. So what has happened with the music is that it is still very much Sara Evans music. It’s just a little bit deeper than I’ve gone in the past.”

Sara Evans is one of country’s iconic modern singers and her music has resonated on country radio, at concert halls and amphitheaters, and in fans’ personal playlists. And the music she’s made to date is authentically her. But where Born To Fly narrowed the crowd of voices around her, Words is distinctively Sara Evans. For a woman who always tackled the music her own way, the new album is 100% her own.

It’s a big reason that the album is titled Words. The songs generate a number of words – flexible, commanding, sassy, daring, loving, hopeful, resilient – that all embody parts of Evans’ inimitable persona.

“Songs are a combination of words and melodies, and it’s the words that matter most to me,” she says. “When we go into these pitch meetings, people always ask, ‘What are you looking for? Are you OK with doing something that’s a little more pop?’ I always tell them, ‘Just play me great lyrics.’ That’s what I’m looking for.”

Her adaptability is clear from the outset of Words. The rippling mandolin and bold fiddle in the opening “Long Way Down” hint at bluegrass. The moody second track, “Marquee Sign,” segues into pop-leaning territory with jagged keyboard sounds and thick harmonies, including her 14 year-old daughter, Olivia. The third song, “Diving In Deep,” employs rolling bass and buoyant percussion to establish an island feel.

There’s plenty more variety along the way: the light reggae approach to “Rain And Fire,” the Celtic undercurrent in “I Need A River” and the motherly parental ballad “Letting You Go,” written for son Avery, who’s just months away from leaving the nest.

Words closes with an acoustic revision of “A Little Bit Stronger,” her pensive, heartbreak anthem that spent two weeks at #1.

That latter title represents a look at the journey thus far, one that’s kept Evans firmly in the forefront of country music for a solid 20 years. Born and raised in Boonville, Missouri, she grew up listening – like much of her audience – to a mix of country, pop and rock on the radio. She began singing with the family band when she was five and made her first attempts at recording as a teenager, committing to a creative path with her move to Nashville in 1991.

Smitten with country’s legacy, her version of Buck Owens’ “I’ve Got A Tiger By The Tail” won the approval of songwriter Harlan Howard – a Country Music Hall of Fame member who authored Patsy Cline’s “I Fall To Pieces” and The Judds’ “Why Not Me” – and of George Jones, who personally invited her to open for him at the historic Ryman Auditorium on the strength of her first album.

That project – Three Chords and the Truth, produced by Dwight Yoakam’s then-guitarist, Pete Anderson – arrived in 1997 to critical acclaim. It accurately represented a key piece of Evans’ musical personality, yet it missed other elements that were likewise influential.

“If I could go back and whisper in my ear, I probably would have advised myself to go a little bit broader with the music and not make such a hillbilly record,” she says. “I was in this mindset that I was gonna be a female version of Dwight Yoakam. That’s a part of who I am, but it’s not all of who I am. I also grew up listening to Stevie Nicks and Phil Collins and so I wish I would have rounded myself out a little more on that first project.”

She clearly learned from the experience. Her resume now includes 14 Top 20 country hits, ranging from her reassuring first #1 – “No Place That Far,” featuring background vocals by Vince Gill – to the neo-traditional “Suds In The Bucket” to the elegant, spiky pop feel of “Slow Me Down.”

But Evans has been expansive in other parts of her public life, too. She’s co-authored a trio of books for Thomas Nelson; advocated on behalf of the Red Cross; became an active contributor to the community in Birmingham, Alabama, where she’s lived with husband Jay Barker for nearly a decade; and established a lifestyle blog — A Real Fine Place — that captures her flare for fashion, beauty and cooking. That blog also demonstrates that she understands, and lives, the solid, practical American work ethic that’s alive and well in her fan base.

“Kim Kardashian will post, ‘Oh my gosh, you guys, look at this new Dolce Gabbana thing that I got,’ but everything is so high-end,” Evans says. “My fans are in middle America – you know, country music listeners, small town, exactly what I come from – and so I’m like, ‘Well, I totally found this incredible belt in Target and I put it with this nice shirt.’ Mine is completely relatable. I feel like the All-American girl-next-door that you could be a friend and go have coffee with.”

Evans is such a sign post for women in country that when the producers of the Nashville TV series wanted to ensure its realism, they sought out Evans as a consultant to help them understand firsthand the dynamics of operating as a touring country singer and a mom, specifically informing Connie Britton’s character, Rayna Jaymes. With the formation of Born To Fly Records, Evans now has a life-meets-art moment, with her real life embodying the label-owner role that Jaymes took on with the fictional Highway 65 Records. Not that Evans has any intention of copying the on-screen character.

“I’m not trying to be Rayna Jaymes and I certainly don’t want to die in a car wreck,” Evans says with a laugh.

What Evans does want to do is represent the full panorama of her artistic vision. By handpicking the team around her and making self-expression the priority of her work, she’s found songs that continue to connect her to the emotional core of her audience, and to adhere to that Born To Fly embrace of risk and adventure. That theme is a big part of Words, particularly in “Letting You Go,” as she encourages her son to find his own path, singing “You were also born to fly away” at its motherly apex.

“We were crying when we wrote it,” she says. “That’s so sad, and it’s so full-circle. We couldn’t even sing it all the way through to get a work tape because we were crying so hard.”

The tears come from the separation that accompanies children growing into adulthood, but they’re also a result of knowing that his path – like her own – will have its hardships. That’s where the music part comes into play on Words. There’s an arc to the album, and in particular to the sonic evolution of “I Need A River,” that hints at the resilience that’s key to a successful life. Trusting in their ability to bounce back is what enables people to take their biggest – and, sometimes, most rewarding – risks.

“I DON’T USE THAT WORD A LOT, RESILIENT, BUT I WOULD SAY THAT’S THE BEST WAY TO DEFINE ME AS A PERSON.”

“I feel so blessed, but at the same time, there’s blood, sweat and tears in every single thing that I’ve gotten in this life. I have gone out and just really, really sold it, and I’m still doing that to this day.”

Doing it her way. As a mom. As a record company entrepreneur. And, mostly, as a distinct artist still excited about her unique journey.