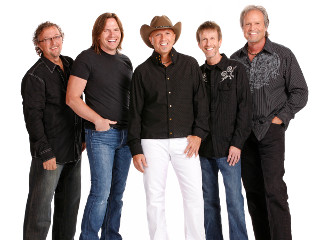 Join us before the Sawyer Brown concert for the Talent Quest International Karaoke Finals.

After a year of competeting around the world, the final competition will be held from 2:30 to 6:30 PM in the Grand Event Center. All you need for entry is your Sawyer Brown ticket. The international top 6 performers will open for Sawyer Brown starting at 7:30 PM.

Mark Miller was born in Ohio, but moved to Florida when he was in eighth grade. Growing up, he played basketball, went to the beach, worked at Walt Disney World, and went to school—pretty much in that order. He was on the basketball team at the University of Central Florida when he started writing songs, finally deciding to move to Nashville to focus on singing and songwriting. The move worked out okay.

Mark has written many of Sawyer Brown’s hits, including “Step That Step,” “The Walk,” “Thank God for You,” “The Boys and Me,” as well as the band’s anthem: “Some Girls Do.”

Mark discovered the band Casting Crowns and has produced all of the band’s CDs, winning a Grammy for his work with them along the way. In April 2013, “Ring the Bell,” a movie that Mark wrote and produced, was released—and he has more movies in the pre-production stage. He doesn’t sleep much. Mark and his wife Lisa have two children—Madison and Gunnar. They own their daddy.

Shayne Hill is the not-so-new “new guy.” Shayne joined the band in June of 2004—after rehearsing with the band once. Once. Yes—he was that good.

Shayne grew up on the road playing music. His family had a band and they toured all across the Western U.S.—with Shayne playing even more instruments than he does today. But no—he will not play fiddle for you. We’ve already asked him.

Once moving to Nashville, Shayne toured with Chely Wright, Avalon, and LeAnn Rimes, just to name a few. He is also an in-demand background singer and guitar player. And since he needs just a little bit more to do, he has his own recording studio—where he can be found whenever one of his kids isn’t crying…and sometimes even when they are.

Shayne and his wife Kristin have two children, Jesse and Harper—they are cute like their mama.

Jim Scholten plays all the low notes—always has, always will. We’re all good with that.

Jim began playing music when he was just a kid—which makes sense, considering that his mom was a music teacher. It should be noted that he often played his music louder than his mom would have like him to—it should also be noted that that did not stop him.

Jim played in bands throughout his home state of Michigan prior to moving to Nashville. He tells us that we are his favorite band, though—and we believe him. Jim’s got an honest face.

Jim plays bass on numerous recording sessions every year—and still makes time to play in the praise band in his church when he’s home. We think he tries not to play too loud in church.

Jim is the proud father of Nick and Anna—who should really think about forming their own band. They’ve got game.

Gregg “Hobie” Hubbard was born and raised in Apopka, Florida—The Indoor Foliage Capitol of the World. So there.

There was never a time Hobie can remember that he wasn’t listening to—and by listening we mean obsessed with—music. He grew up attached to the radio and record player—and is still rarely very far from either one today…although the record player looks more like an ipod these days.

Hobie sang and played piano in church through his high school years and began writing songs when he was in college. He has co-written several of Sawyer Brown’s hits, including “The Dirt Road,” “Drive Me Wild,” “’Round Here,” and “Outskirts of Town,” as well as several songs on the Sawyer Brown Christmas albums. In addition to Sawyer Brown, Hobie has sung background on recording sessions for a variety of artists.

Hobie gave up a promising career in the food services industry to join the band. He might or might not still have the smock.

Joe is a graduate of the Berklee College of Music and earned a Master’s Degree in Music from the University of Miami—but he doesn’t rub that in the other guys’ faces. That speaks volumes about him.

In addition to being a sought-after session drummer, Joe is accomplished symphonic musician, as well. He has played with the Nashville Symphony, including at their heralded appearance at Carnegie Hall.

Joe is also a respected percussion instructor, doing his part to nurture the next generation of drummers and percussionists.

Joe is the proud dad of Tristan, Jenna, and Bryce.