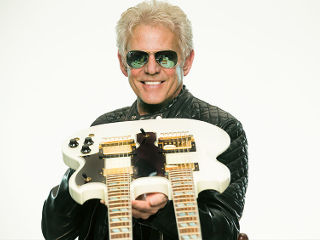 Don Felder
Formerly of The Eagles

Don Felder is renowned as a former lead guitarist of The Eagles, one of the most popular and influential rock groups of our time.

The band’s record-setting compilation Their Greatest Hits (1971-1975) sold over 29 million copies in the U.S. alone and was awarded by the RIAA the top-selling album of the 20th Century. A member of The Rock and Roll Hall of Fame since 1998, Felder served as a member of The Eagles for 27 years, putting his mark on numerous Eagles milestones. Felder originated the music and co-wrote The Eagles’ biggest hit – the iconic, Grammy-studded smash “Hotel California” – along with fan favorites like “Victim of Love” and “Those Shoes.” He became immediately celebrated for his lyrical, signature guitar work on legendary songs like “Hotel California,” “One of These Nights,” “New Kid In Town,” and numerous more.

After leaving the group in 2001, Felder also became a New York Times bestselling author when his riveting confessional memoir Heaven and Hell: My Life in The Eagles proved a major commercial triumph upon publication in 2008. Growing up in the Gainesville, FL local music scene, Don Felder would incongruously encounter a number of the greatest talents that would go on to change rock and roll history. In high school, he formed a band with a young Stephen Stills; Felder also gave guitar lessons to a teenaged Tom Petty at the local music store, and The Allman Brothers were also local pals. “Duane Allman was first person I ever saw play electric-slide guitar,” Felder recalls. “I said, ‘You’ve got to show me how to do that,’ so we sat on his mother’s floor in Daytona Beach and Duane taught me how to play slide.” Florida is also where a young Felder would first meet Bernie Leadon, a founding member of The Eagles who would be instrumental in bringing his childhood friend into the band. In fact, it was Leadon who encouraged him to come out to Los Angeles, where Felder found himself working both with The Eagles and in both sessions and live performances for numerous music legends spanning the musical spectrum: The Bee Gees, Bob Seger, Michael Jackson, Alice Cooper, Kenny Loggins, David Crosby, Graham Nash, Boz Scaggs, Warren Zevon, Joni Mitchell, Stevie Nicks, Vince Gill, Stevie Wonder, Elton John, Paul Simon, Diana Ross, Barbara Streisand – and even and old friend, Steven Stills.

Putting all the tumult and glory he’d experienced to that point into perspective gave new urgency to the creation of Road to Forever – only Felder’s second solo effort in a storied, four-decade-plus sojourn through rock history. Road to Forever represents the culmination of a personal journey of introspection that Felder began over ten years ago. In 2001, he suffered an emotionally-devastating double blow – separating acrimoniously from The Eagles for the last time while facing the end of his first marriage, which had lasted 29 years and produced four children. “Every identity I’d been attached to – musician, husband, and father – was being taken away,” he says. To heal, Felder began writing down as many memories as he could, putting his past in perspective. Finding these musings compelling, Felder was inspired to write a book, and connected with legendary Hollywood deal-maker Michael Ovitz to set it up. “Two weeks later, I went to New York with a three-page synopsis, and received four offers from publishers,” Felder says. “Now I was forced to reflect on my life.” That introspection inspired him to “write out the stories of my life as songs. After I collected myself, I found I needed to go out and play music again, and that’s how I began recording the upcoming album.

“Who would ever thought that a guitar player from Gainesville would go on to be in The Eagles, and then become a best-selling author?” Felder continues. I had to figure all that out for myself, and I’m glad that I did. In the process of making the upcoming album, I found out who I really am – I had to find out what happened when I almost lost it all.”