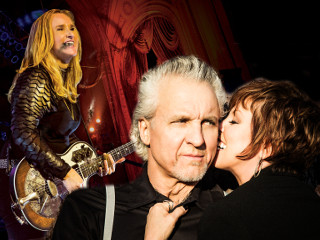 Pat Benatar: she’s always been a rule-breaker and a trail-blazer, she remains a bold and distinctive artist both on stage and on record, and now, after more than three decades in rock ‘n’ roll, she’s a bonafide living legend.

A four-time Grammy winner, Benatar is a classically trained mezzo-soprano. During the 1980s, Benatar had two RIAA-certified Multi-Platinum albums, five RIAA-certified Platinum albums, three RIAA-certified Gold albums and 19 Top 40 singles, including the Top 10 hits, "Hit Me With Your Best Shot", "Love Is a Battlefield", "We Belong" and "Invincible". During the early days of MTV Benatar was one of the most heavily played artists on the popular music channel. Her hits continue to be as unforgettable now as they were at the dawn of MTV, when Pat emerged, fearless, fighting and forging a path for other female rock stars around the world.

In 1978, in between appearances at Catch a Rising Star and recording commercial jingles for Pepsi Cola, Benatar headlined New York City’s Tramps nightclub, where her performance impressed representatives from several record companies. She was signed to Chrysalis Records by co-founder Terry Ellis. In the spring of 1979, producer and writer, Mike Chapman, introduced Benatar to Neil Giraldo, an up and coming guitarist. Giraldo began his career in 1978, as a key member of the Rick Derringer band, after beating out 200 other guitarists for the position. Chapman felt Benatar needed a musical director and partner who could establish a more aggressive sound and thought Giraldo was the perfect choice. In Giraldo, Benatar found someone as strong as her, someone who could match the same fire-power, someone who could inspire her, while being inspired by her. Their connection was instantaneous… It was indeed, a perfect fit.

After being inducted into the Long Island Hall of Fame in 2008, Benatar released her long-awaited autobiography in 2010, the appropriately-titled Between a Heart and a Rock Place – which allowed the world a fascinating glimpse into the life and times of one of the most beloved female rock ‘n’ roll icons of all time.

Pat Benatar is acknowledged as the leading female rock vocalist of the ‘80s – a feat marked by her unprecedented winning of four consecutive Grammy Awards between 1980 and 1983, as well as three American Music Awards – but Benatar and Giraldo remain a rock ‘n’ roll powerhouse today, selling out concerts and still wowing audiences after over three decades in music together. Theirs is a chemistry that will, undoubtedly, be thrilling music-lovers forever.

Neil "Spyder“ James Giraldo, has been a professional musician, producer, arranger and songwriter for over four decades now, changing the face of the pop charts throughout the 1980s with his collaborator, muse and wife, Pat Benatar. More than just an explosive steel bending guitar player, Giraldo’s innovative vision helped him create the signature Benatar sound, from its inception.

Today, Giraldo’s career is as dynamic as ever, as he is in the process of completing two books – one an auto-biographical novel, one a coffee table book — as well performing in a new band project with Scott Kempner from the Del Lords/Dictators. He is also further expanding his Bel Chiasso entertainment company, which develops a variety of television and film projects. In addition, he has also opened up his large vault of unreleased, unfinished songs and will be completing and releasing various new tracks with Benatar, as well as with other artists, in the coming months.

Melissa Etheridge stormed onto the American rock scene in 1988 with the release of her critically acclaimed self-titled debut album, which led to an appearance on the 1989 Grammy Awards show. For several years, her popularity grew around such memorable originals as "Bring Me Some Water," "No Souvenirs" and "Ain't It Heavy," for which she won a Grammy® in 1992. Etheridge hit her commercial and artistic stride with her fourth album, Yes I Am (1993). The collection featured the massive hits, "I'm the Only One" and "Come to My Window," a searing song of longing that brought Etheridge her second Grammy® Award for Best Female Rock Performance. In 1995, Etheridge issued her highest charting album, Your Little Secret, which was distinguished by the hit single, "I Want to Come Over." Her astounding success that year led to Etheridge receiving the Songwriter of the Year honor at the ASCAP Pop Awards in 1996. Known for her confessional lyrics and raspy, smoky vocals, Etheridge has remained one of America’s favorite female singer-songwriters for more than two decades. In February 2007, Melissa Etheridge celebrated a career milestone with a victory in the “Best Song” category at the Academy® Awards for “I Need to Wake Up,” written for the Al Gore documentary on global warming, An Inconvenient Truth. As a performer and songwriter, Etheridge has shown herself to be an artist who has never allowed “inconvenient truths” to keep her down. Earlier in her recording career, Etheridge acknowledged her sexual orientation when it was considered less than prudent to do so. In October 2004, Etheridge was diagnosed with breast cancer, a health battle that, with her typical tenacity, she won. Despite losing her hair from chemotherapy, Etheridge appeared on the 2005 Grammy® telecast to sing “Piece of My Heart” in tribute to Janis Joplin. By doing so she gave hope to many women afflicted with the disease. Etheridge is scheduled to release a new album honoring Stax Records in August or September 2016. She is currently recording at Royal Studios in Memphis on what will be her first album since 2014’s critically lauded This Is M.E. Along with original material, Etheridge’s ambitious Concord release will feature interpretations of classic songs from the legendary Stax catalog, celebrating its artists and legacy and spotlighting the vital role Stax Records played in the Civil Rights Movement. Engineered by Lawrence “Boo” Mitchell, son of famed music producer Willie Mitchell, the as-yet-untitled project will include a number of top Memphis musicians, including the Hodges Brothers.