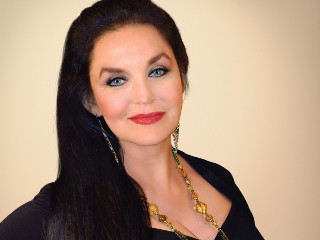 Crystal Gayle has been a favorite of audiences of country and popular music since attaining national prominence with her first chart records in the mid-seventies. Perhaps most identified with her classic recording of her timeless signature song Don’t It Make My Brown Eyes Blue, Crystal is also well known for her multi-format hits You’ve Been Talking In Your Sleep, When I Dream, Half the Way and her duet with Eddie Rabbitt, Just You and I. Crystal has released over twenty number one hits and has been awarded numerous times by the Grammy’s, the Country Music Association, the Academy of Country Music, the American Music Awards, and the American Music Operators Association. In 2009 Crystal was honored to receive her own star on the fabled Hollywood Walk of Fame.

Crystal is currently in the studio working on a new album. Crystal’s most recent album, All My Tomorrows, complements her country heritage. All My Tomorrows, released to outstanding critical response, is a collection of classic American standards that Crystal produced with Jay Patten, her longtime music director. The album is an enjoyable masterpiece that bonds her familiar crystalline voice and mature vocal styling with some of the greatest songs of our popular music heritage. “I feel honored to perform these favorite songs that any artist loves to sing, songs with timeless beauty.” The fourteen selections range from “You Belong to Me,” “Smile,” “It Had to Be You,” “Cry Me A River” and “Sentimental Journey” to Ray Charles’ “Hallelujah I Love Him So.”

Crystal has contributed songs to three Grammy winning children’s albums: Sesame Country (in which she dueted with Big Bird), Here comes the Rainbow, and Songs from the Neighborhood - The Music of Mr. Rogers. Crystal’s adds her first solo children’s album, In My Arms, a collection of lullabies that perfectly suits her warm vocals. “I loved all of these songs immediately and the tender and imaginative production makes In My Arms an album that appeals to children of all ages.”

Crystal is a long-time resident of Nashville, Tennessee. When Crystal is not touring she spends much of her personal time with her immediate and extended family. Crystal also makes time for community, school and church involvement. She was the first recipient of the Waterford Crystal “Celebration of Light” award in recognition of her many charitable activities.